We’re excited to announce that Katie has been chosen as the first speaker in a series of featured young people at the YKNOT Windsor-Essex 3rd 3rsday mixer this month! Come out to Abars on August 21st from 6:30-8:30 to mingle, meet new people and hear Katie’s story about what ties her to Windsor-Essex as a young person and an entrepreneur. For more information and to register for the event, visit the Eventbrite page here.

This week we hosted a social media workshop offered exclusively for DWBIA members! We were at The Holiday Inn Downtown on Tuesday June 17th from 4-5:30 and Thursday June 19th from 5-6:30 with a great turnout for both sessions. We met some awesome business owners representing bars, restaurants, retail, service-providers, hotels and organizations. We were very happy to hear the positive feedback and look forward to offering this workshop and others like it to additional BIAs and member-based organizations in the city. Contact us if you’re interested in learning more about our workshops! 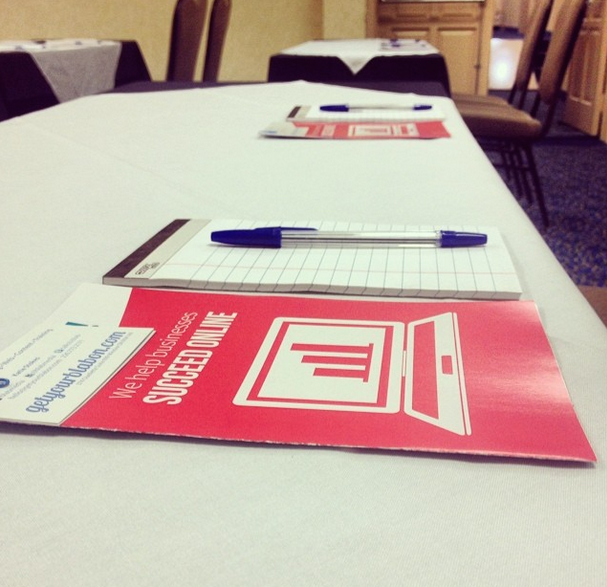 We spent weeks brainstorming, exploring different options and researching concepts with our intern Anna before we decided on the perfect fit for the organization. As young professionals with such strong personal ties to Windsor-Essex, we’re very excited to have been chosen to brand this initiative!

As part of the launch the team would like to ask what ties YOU to Windsor-Essex? For more information and to get involved, be sure to check out the website we created at www.yknotwe.ca. Stay in touch with them on Facebook, Twitter and Instagram for more updates after the launch!

Can you guess what we’ll be helping to launch on May 22nd? If you’re a young person living in Windsor-Essex, we guarantee you’ll want to get involved! Stay tuned to our blog for more information! 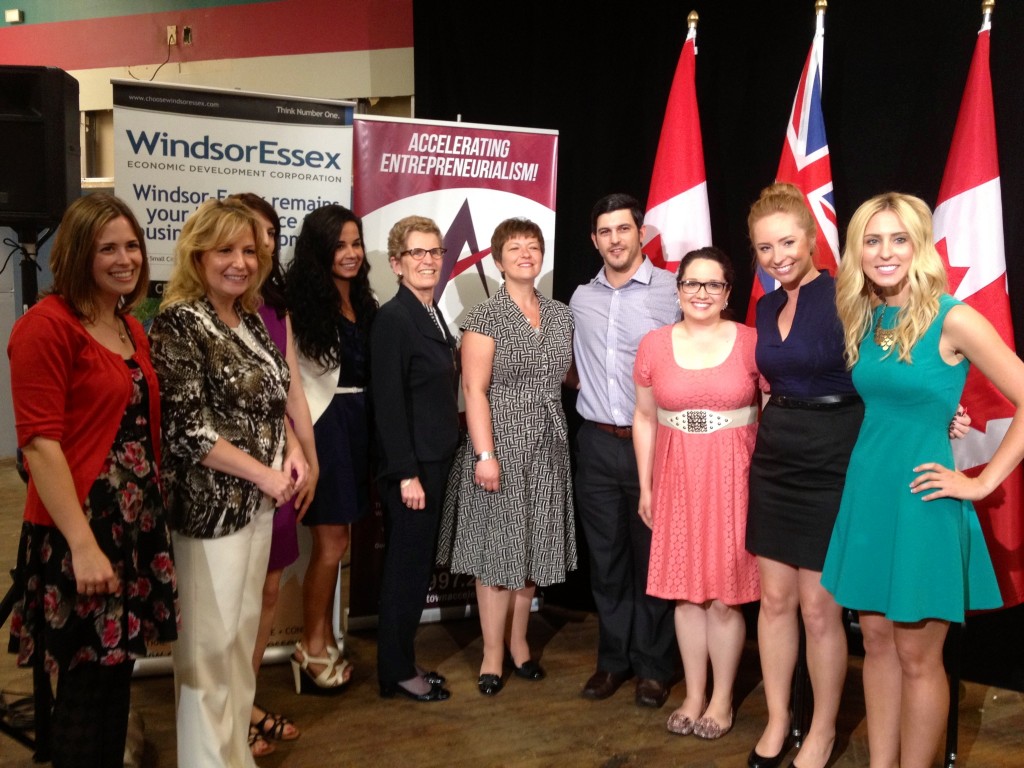 As part of the Youth Retention Task Force, Blab Media is proud to announce that the task force has received a grant from the Ontario Trillium Foundation for $105,500 that will be used to fund an 18-month pilot project that was designed to connect youth with job opportunities in Windsor-Essex. As part of this pilot project, the task force has also created a full time contract job that will provide one well-qualified young person with a valuable employment opportunity.

Ontario Premier Kathleen Wynne and Windsor West MPP Teresa Piruzza were on hand to announce the funding and meet the members of the task force. 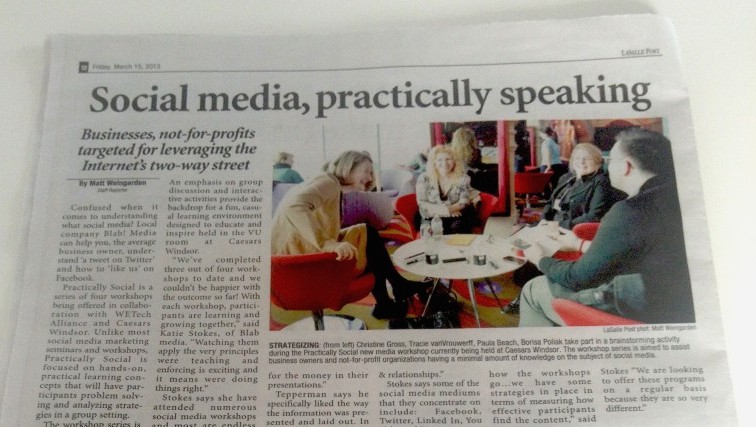 Woke up to find this awesome article reviewing our social media workshop series at Caesars Windsor! Couldn’t be happier with how things turned out and so excited for the potential opportunity of continuing this series in the future.

How Social Media Can Help You Land Your Dream Job

If you’ve ever wondered how social media could help you land your dream job, you’ll want to look at this infographic! Get some tips on how to sculpt your online resume, what to include, what to avoid and where to market yourself to reach your goals.

The women behind startup Blab Media do a lot more than just talk.

The women met while working at an insurance agency and urged their employer to explore accessing customers via social media. The women spent their lunch hours planning a social media company.

Months later, Stokes’s contract ended and she spent her days drafting a business plan and creating a website.  They launched the company in October 2010 by sending white pumpkins painted blue, the company’s colours, to contacts at St. Clair College and in the media.  Initially, Stokes worked full time while Apolloni kept her graphic design job for the first six months.

“It was scary, really, really scary,” Apolloni said about quitting her job to focus on Blab Media.  “I was about to turn 25. If I don’t do this now, I’m never going to do it. I’ll have a family, a car, house, responsibilities. I needed to do this now while I could afford to take the risk.”

Blab Media gets many of its clients through referrals and from the networking. Surprisingly, it wasn’t until it moved into a bricks and mortar office that the client list tripled in one month. That could be one indication why it’s been challenging to get clients to think outside the box and do a cheap social media marketing campaign rather than a traditional approach.

At times creating a website and using Twitter and Facebook to promote a company can be more successful than leafing cars in a parking lot, Apolloni said.

Richie Keirouz hired Blab Media to help him launch RichBody, a personal training service that provides customers with diet, exercise and moral support. Stokes and Apolloni worked with him to design his website through which he has found most of his 18 clients.

“They’ve been great in helping me out,” he said. Stokes was especially good at providing website content that reflected his thoughts, Keirouz said.

Success has brought new surroundings. Blab Media recently moved into the Canada Building at 374 Ouellette Ave. There is room for expansion as the company grows.

While the women live with their parents, they bring in enough revenue to support themselves.

“There was never a time when we had no clients,” Stokes said. “Now we have the most clients at once that we’ve ever had.”

The biggest challenge they face is their youth.

“It’s hard for (potential clients) to accept because we are younger we know something they don’t,” Stokes said. “When we go to networking events, people ask if I’m a student. Business is still a boys club. It’s hard to break that barrier.”

EDITOR’S NOTE: This is part of a series about those in their 20s and early 30s finding a place in the local workforce.

2012 has been a crazy year for social media! The London Olympics, war and conflict around the world, a record-breaking IPO, the introduction and growth of Pinterest, a presidential election and multiple natural disasters gave social media users plenty of opportunities to share their perspectives this year.

Believe it or not, the first day of 2013 is quickly approaching. As January looms ahead, we’ve started to think about the new year and some social media resolutions moving forward. We’re all about being realistic and setting ourselves up for success. Keeping that in mind, we’ve listed three resolutions that will help any business kickstart their social media strategy in 2013.

1. Go Mobile
Smartphones, tablets and e-readers will likely once again be the hottest holiday gifts. Whether you’re developing social media campaigns through mobile applications or adding social media integration to mobile sites, a social media strategy is incomplete if you’re ignoring mobile users. If you’ve never viewed your website on a tablet or smartphone, you’re in for a real surprise so get it over with at the beginning of the year so you can spend the rest of your time making the necessary changes. It has been predicted that 2013 is the year that mobile web browsing will likely surpass desktop browsing so don’t get left behind!

2. Explore Video
Producing and sharing more videos will open you up to a whole new world of viewers. There are more than 3 billion videos viewed each day on YouTube alone so take the time to really explore your options. If you can, hire a professional to write your copy, shoot the video and edit the final product. Just because video is a fun way of communicating doesn’t mean it deserves to look any less cohesive and polished than your other forms of branding. You can start by looking into your options with podcasts or creating a valuable video series for your customers and potential customers.

3. Get Your Learn On
Staying up to date and current with all things happening in the world of social media is essential for success and growth. In the same respect, improving your technical knowledge, equipment and software will also be greatly beneficial. There are plenty of ways you can expand your knowledge; subscribe to new RSS feeds, explore HTML coding, or sign up for Google alerts.

Thanksgiving isn’t just about eating anymore! Check out these interesting facts about how people interact on social media during Thanksgiving. Do you know what some of the most popular side dishes are?

Last Saturday I spent the morning working at @whis

Do you incorporate video into your marketing conte

Visited @wfcucreditunion in person for the first t

Want to tap into the power of social media marketi

Still looking for a special gift for mom? There are plenty of ways to support local for #mothersday: