This morning as I scrolled through my seemingly endless Facebook News Feed, I had a chance to check out the new Reactions feature that is now available when you hover over the “Like” button anywhere on the website. Reminiscent of Buzz Feed’s Reactions, the new option lets you express how you feel about a friend’s update with a pre-selected emoji that is assigned to a specific response (Like, Love, Haha, Wow, Sad and Angry). While the selection is small to start, I’m sure the options will continue to grow once Facebook has a chance to test it out and see how users respond.

I have to admit that I’m not a huge fan. I find that real, genuine interaction on Facebook is already so difficult to come by and that giving people another way to opt out of actual conversation isn’t exactly a step in the right direction. There seems to be a delicate balance between simply “Liking” a status and becoming a legit internet troll these days and I don’t think these reactions are going to help. You know when you post something and in your mind it’s the funniest, smartest, happiest, most insightful thing you’ve ever said? You start imagining all the interaction, engagement and conversation it’s going to generate and in the end it falls flat with 25 “likes” and one comment from your Grandma that consists of three poorly selected emojis. That entire situation seems all too common these days, especially on Facebook where people confuse interaction/engagement with a hollow “like” on your status or photo. It seems that as time passes, these networks are becoming less about genuine action and more about social image. Or maybe I’m just too much of an emoji-snob? Who knows!

What do you think of this new feature? Do you think it will add value to your every day interactions on Facebook or will it only make communication on the platform worse? 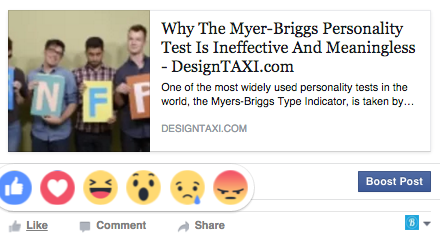